These pages are for the Native Community. A social network and open forum for native author and relevant material. Enjoy.
Click the "Categories Tab" to start reading.

Posted by Jennifer Vance on Wednesday, 17 December 2014 in Wig Wau

I came across this tutorial yesterday and thought I would share it. The finished chain looks amazing! I made one, and am in love with it. I hope you enjoy! http://www.fusionbeads.com/Spiral-Rope-Chain

Posted by Jennifer Vance on Wednesday, 13 August 2014 in Crafting, Regalia and other things

For the first tutorial, I wanted to post something that would involve both children and parents, while searching online I came across this blog post tutorial from eclecticakiddo.com.

One of the first things I learned to bead when I was younger was the daisy chain. This tutorial focuses on creating a daisy chain using toilet paper rolls. The principle is the same for using beads. I thought that by posting this particular tutorial using the bigger materials, it would show the step by step process in an easier to understand and follow dialogue. Thus making it a project that would be a great learning tool for both parent and child.

If you have any questions, please feel free to ask.

I hope you enjoy this tutorial. Thanks for looking!

Choctaw tests new passport rule in calais maine. For Friends in the North and South

CALAIS - Although traffic flowed smoothly most of the morning as customs officials enforced the new requirement Monday for U.S. citizens to show passports or pass cards to re-enter the country, there was one glitch when an American Indian tried to make a statement that the new passport rules do not apply to Indians.

Lead Horse, a Choctaw Indian from Oklahoma, said Indians do not recognize the border.  The rest of the article has to be downloaded if you wish to read the article.

We do not call ourselves united states slaves or citizen.  Citizen means slave, we do not call ourselves americans or american indians, natives, indigenous, ab-original, indian americans and so on and so on.  Every tribe of people in the north has a name in the Original language for the people.  We are the Original people of the north and not a name made by a corporation to be used to describe our people to the foreign people.

Do not call yourself something you are not.  Use your language to describe yourself.

This would include the Original people of the land.  Although there were many original people who did not understand what the united states corporation was trying to do.  I traveled to the north and wanted to hear what they had in mind for our people.

It does not matter the time our people will never have passports.

The newspaper reporter asked the local tribal people why it took a choctaw from Oklahoma to come from the south when there was not one person from the local tribe who said anything to disagree with the policy.

When we left the area I looked into areas where more of our people were protesting this announcement of the corporation of the united states.

The people called for wood and donations of food and had a fire that was kept for twenty four hours a day.  I had neither wood nor food to send.  I heard the Elders were maintaining the fire.  A friend came from the west to join me.  Being of the Dine people of what is called new mexico.  I informed my friend I was going to Akwesasne to help cut wood and watch the fire for the elders.  I did not have the money to go but began to sell cans and look for funds to travel to help.  I contacted a friend who was part of the Akwesasne people´s fire and informed them myself and a friend were on our way very soon.

Another week went by and my friend again informed the people we are still coming.

I stayed in contact and talked with my friend and spoke that I do not know the time but we are still coming.  My friend told me that at another meeting of the people´s fire my friend did not stand up and announce that we were still coming and on our way.

The amount that were needed for travel my friend of the Dine people had received from his parents and had enough to travel.  I still needed more for the amount needed.  Talking with my Dine friend I spoke of the travel and that it would be good to go ahead and reach the people and I would be on my way soon.  My friend did not want to travel without me and decided to wait till I had reached the amount for travel and we would travel together.  Ten dollars short of the amount needed a friend from a healing ceremony arrived in transportation.  My friend from the healing ceremony asked if we in need of transportation, and where we were traveling to.  I said to my friend of the healing ceremony ``I need to find ten more dollars and need to travel to Akwesasne to help with a fire and cut wood.``  My friend handed me the amount and thanked me for sharing in the healing ceremony for another friend in need.

Now we were ready to travel to Akwesasne.  With no money for food I packed syrup, peanut butter, bread and water.  I left a contact message with my friend in Akwesasne but did not know if it was received as we went straight to the transportation area to depart for Akwesasne.

We arrived in the village of Akwesasne at night the next day.  There was not a transportation area in the village.  Departing from the transportation we met people and asked where the fire was being kept.  Everyone knew the location and informed us it was about five miles.  I talked to my friend of the Dine people and we decided to walk to the fire.  The road was dark and we viewed a light in the distance that was a gambling place.  Deciding that we might find transportation there we went in the direction of the light.  The people were friendly but took notice of our backpacks.  We were allowed to enter but our backpacks had to be kept in a safe area while we were there.

I talked to people there and informed them that we were from the south and are here to help with the fire.  We just needed transportation to the fire.  Word spread quickly and a young man from Oklahoma came to visit me.  The young man worked at the gambling place and said when the shift was over we would have transportation.  We also received other proposals for transportation from other people who knew we were there.  Having to wait for their shifts to be over we waited in the gambling place and talked to many people.  A person approached us and asked if we were the people from the south who came to help with the fire.  We said yes and had been asked to come with this person.  While we walked the young man informed us that we have transportation waiting for us.

My friend who I had been communicating with had received the message and had been looking for us and had been checking every place with a light on.  A Bear Clan Mother was also with my friend.  My Dine friend was the first to receive hugs and was asked ``are you leadhorse`` my friend smiled and pointed at me while I was walking to our new friends.  It was a happy time to finally meet the people I had been communicating with and the Bear Clan Mother.

Once we arrived at the Fire we met more people who had also arrived to help with the fire.  The people were very friendly and asked many questions.  Which all questions were answered with truth.  We had talked with the people and informed them that we came to cut wood and watch the fire for the elders.  We ate and went to sleep in a small building.  This was to be our home for the next month and a half.

In the morning an older man came with a tractor and wood cutting supplies.  Looking at us from the tractor he were asked if we were the people who came to cut wood for the fire.  There was a small amount of wood that needed to be split by the fire already.  I looked up at the older man and smiled and said ``yes,``  The older man guided us in the direction of the back of the building and there were a large amount of uncut logs.  We began to cut as fast as we could, we loaded the wood onto the tractor and the tractor would go and drop off the wood and return.  When the tractor would return we would already have wood cut and ready to be loaded.  This pile of wood did not take long to be completed.  The older man told us that that pile had been there for quite some time now and it seemed like it took 45 minutes for us to cut it all.  It turned into a fun and friendly competition.

We returned to the front of the building and began to split the wood now.  The older man was impressed and we became instant friends and are still friends to this day.  We cut wood for the people for a month and a half.

It was time to for me to return south.  My Dine friend departed a week or two before I had completed what I needed to complete for the people.  I had no funds for travel and had to borrow funds from a friend from Akwesasne.  The people of the people´s fire had a dinner and ceremony at the fire and also a blanket dance so I would have funds to return south to my linage family.  The amount given was just the right amount for me to eat and be comfortable till I reached my destination.

To help contact Leadhorse at leadhorse61261213@yahoo.com ,  Donations can be made by way of a money gram or western union.

Posted by Jennifer Vance on Tuesday, 05 August 2014 in Crafting, Regalia and other things 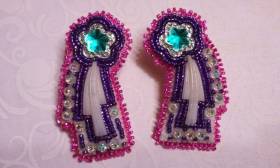 Jennifer yeyásö. - My name is Jennifer, some of you may also know me as Utsi'tanôwê'  or Kamama (Butterfly). I've been crafting for as long as I can remember, wither it be drawing, painting, sewing, beading, etc. I feel as though each and everyone of us has a talent. Perhaps you're a leather worker, a blacksmith, a flint napper, beader, seamstress, etc. yourself. All forms of crafting is an art, and these arts are a wonderful thing. If you're an old skool crafter, or a newbie just getting started, I hope this blog provides useful information to help you along your way. In the future you will be able to find tips n' tricks, tutorials, bead graph patterns, photos, and random talk about the latest projects I'm working on. If you have ideas or suggestions on what you would like to see, please feel free to let me know. I look forward to posting, and thank you for looking. :)